(Although the backs of their cards show them as born exactly a year apart, I'm going with the more accurate Baseball-Reference.com information.) 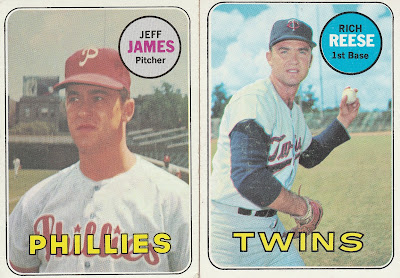 Jeff James pitched for the Phillies in 1968 and in September 1969. He began as a starter, but as other players joined the team (notably Jerry Johnson), James was moved to a relief role, and then back to the minors for all of 1969 except for a September call-up. He had cards in the 1969 and 1970 sets.

Rich Reese joined the Twins in 1967, essentially filling the role previously manned by the traded Don Mincher - which was to play 1st base whenever Harmon Killebrew was moved over to third base. Reese was a regular player for the Twins from 1968 to 1972, then finished up in 1973 with the Tigers (and back to the Twins for a month).

Posted by Jim from Downingtown at 1:16 PM No comments: 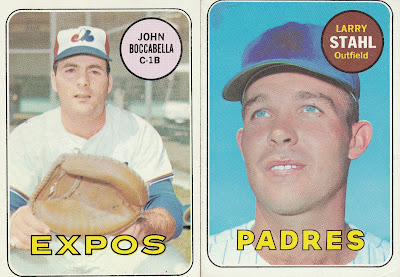 John Boccabella played for 12 seasons, mostly as a 3rd-string catcher and backup 1st baseman.  After 6 seasons wth the Cubs (1963-68), he joined the expansion Montreal Expos, and played 5 seasons in Canada.  In 1973 he was the team's primary catcher, starting over 100 games for the only time in his career.  He wrapped up with the Giants in 1974.

Larry Stahl played for the Athletics, Mets, Padres, and Reds from 1964-73.  Most of his major-league playing time came in 1966 (with the Athletics) and 1971-72 (with the Padres), the only 3 seasons he managed to stay out of the minor leagues.

Posted by Jim from Downingtown at 12:58 AM No comments: