Continuing the series I started with the 1967 set and 1968 set, here is similar information about the 1969 set.

The 1969 Topps set had 664 cards, but since there were two distinct versions of the C Clay Dalrymple and 1B Donn Clendenon cards (not just printing errors), the actual set size is 666. (Those 2 players have been counted twice in this exercise.)

For the first time in many years, the set did not include any team cards. There are 25 manager cards (2 for the Senators), 52 rookie stars cards (none for the Senators), 20 all-star cards, 12 league leaders, 8 World Series cards, 4 multi-player cards, and 7 checklists. There are also 538 cards of individual players.

Here is the position breakdown of the 538 player cards:

That's a total of 494 cards. The remaining 44 cards featured players at more than 1 position. Below is a sample of each position: 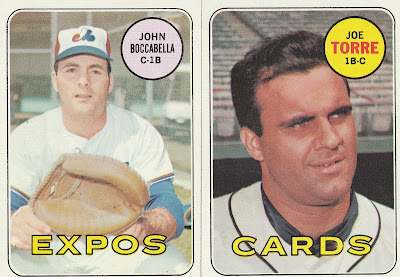 After several years as a "1B-C" for the Cubs, John Boccabella has a new team and a new position! He is joined at C-1B by Jack Hiatt (of course) and Don Pavletich. Boccabella's old job as the lone 1B-C in the Topps set is filled by Joe Torre. 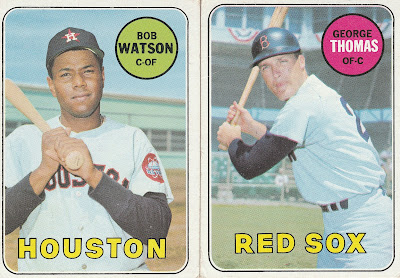 With Tom Satriano now strictly a catcher and Ozzie Virgil retired, there are no C-3B or 3B-C players in the set. The new trend is combining C and OF. Bob Watson's rookie card shows him as the lone C-OF. George Thomas and the Pirates' Gary Kolb are the OF-C cards. 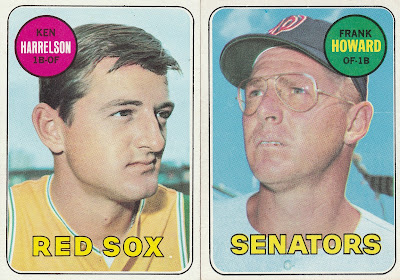 Ken Harrelson leads the group of five 1B-OF, along with Tommie Aaron, Tom McCraw, Mike Hegan, and the Giants' Bob Burda.
Frank Howard is 1 of 4 players at OF-1B (with Tito Francona, Jim Beauchamp, and Art Shamsky). 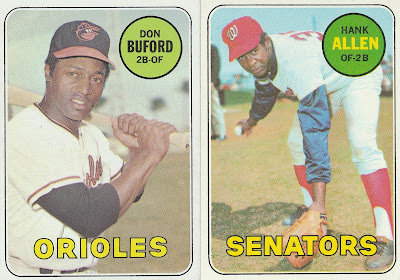 Don Buford is the lone representative for 2B-OF. Hank Allen and the Expos' Jose Herrera have the opposite position. 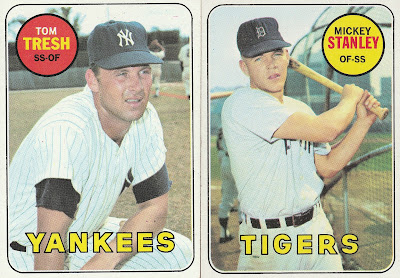 In my 1968 post, I lamented Topps' decision to portray Gary Sutherland as INF-OF, instead of the more accurate SS-OF. In the 1969 set, that combination appears, but only for these 2 cards.

Longtime Tigers' center fielder Mickey Stanley played shortstop in the 1968 World Series, and for the first part of the 1969 season, until he returned to center field when the Tigers acquired.... Tom Tresh! 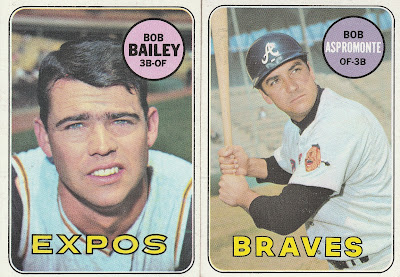 For the 2nd time in 3 years, Bob Bailey is labelled as 3B-OF. This year he is joined by Cesar Tovar and Pete Ward. Bob Aspromonte is the only OF-3B in the set. 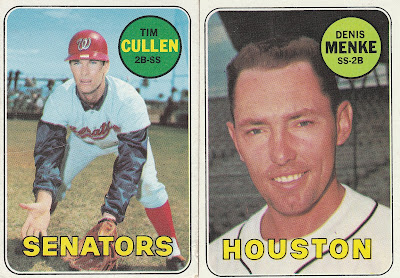 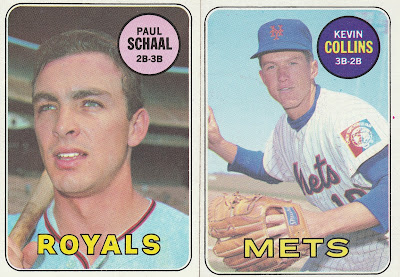 Paul Schaal and Jim Lefebvre are the two cards showing 2B-3B. Kevin Collins is by himself at 3B-2B. 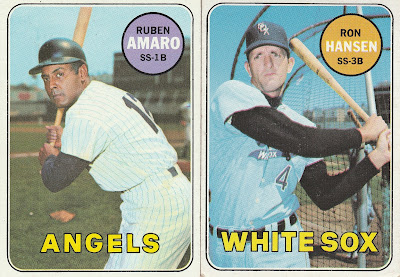 Here's another new combo - SS-1B! These are the only 2 cards for these positions, and there are none for the opposite combo. 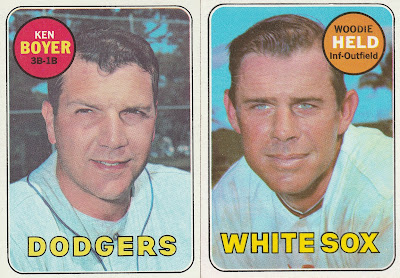 Ken Boyer heads up a list of 5 players with the 3B-1B position (tied for the most with 1B-OF).  Also George Scott and Dalton Jones (BOTH on the Red Sox), Harmon Killebrew, and Deron Johnson. (There are no cards for 1B-3B.)

And last (but not least), the INF-OF position. Woodie Held makes his 3rd consecutive appearance at this position (maybe more - I haven't checked the '66 set yet), and is joined again by Frank Kostro and this time also by Chuck Hinton.


A few weeks ago I realized there was no Rookie Stars card for the Senators. During my research for this post, I discovered that there are only 6 pitchers for the Expos and 7 for the Padres and Athletics. (Most teams have 9 to 11 pitchers.) Also, there is only 1 catcher for the Braves, Padres, and Red Sox, and only 3 outfielders for the Cardinals.

Another oddity is that aside from 1st baseman Wes Parker, the Dodgers had no other infielders with just one position on their card.

When looking at total cards per team, the Phillies and Padres only had 19 cards (2nd year in a row that the Phillies had the least number of cards!), and the Red Sox only had 20, while most teams had 23 to 25 cards.

The post for the 1966 and 1970 sets will follow soon, but since I am missing several dozen cards from each set, I will need to use something else for reference, like this.
.

Posted by Jim from Downingtown at 1:25 PM 2 comments: Links to this post

Here is Indians' #1 catcher Joe Azcue. I didn’t realize until looking at the back of the card today that Joe played for the Reds and Athletics before joining the Tribe. (Odd that Baseball-Reference.com uses a photo of Joe in an A’s cap. He played 594 games with Cleveland, while only 74 with Kansas City.)

One year after coming to the Braves, he moved on to the Athletics (with 3rd baseman Ed Charles and outfielder Manny Jimenez) for pitcher Bob Shaw and infielder Lou Klimchock. 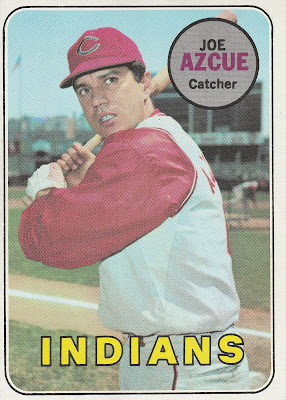 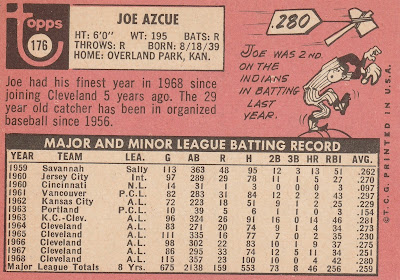 Azcue shared the Athletics' starting catcher job with veteran Haywood Sullivan in 1962, then was traded to the Indians in May 1963 (with shortstop Dick Howser) for catcher Doc Edwards and $100,000.
Wait… Azcue AND Howser for DOC EDWARDS? Who was the Athletics' GM? No wonder they were so bad for so long!

Joe was the Indians' top catcher for the next 6 seasons (1963-68). For most of that time he platooned with Johnny Romano (and later Duke Sims), but managed to start more games than any other catcher each year. He made the All-Star team in 1968, his last full season with Cleveland.

With rookie Ray Fosse transitioning into a starting role in 1969, Azcue was traded to the Red Sox two weeks into the season. The Indians obtained pitchers Dick Ellsworth and Juan Pizarro, and 1B/OF Ken Harrelson in exchange for Azcue and pitchers Sonny Siebert and Vicente Romo.

After only 2 months (and 19 games) with Boston, Joe was flipped to the Angels for backup catcher Tom Satriano. Azcue replaced the tandem of Satriano and Tom Egan as the team's #1 catcher, starting 75 of the remaining 108 games in 1969.

In 1970 he started 2/3 of the games, to Egan’s 1/3. After sitting out the entire 1971 season with a contract dispute, he returned in 1972 but by then the Angels had moved on to John Stephenson.
(Oh please… I’m trying to keep a straight face as I typed that!) Azcue only played 3 games with the Angels in 1972, while spending most of that season’s first half in the minors.

In late July 1972 he and infielder Syd O'Brien were traded to the Brewers for catcher Paul Ratliff and infielder Ron Clark. Joe only appeared in 11 games for the Brewers in the season's final 2 months, then played for the Indians’ double-A team in 1973 before retiring.
Posted by Jim from Downingtown at 10:43 PM No comments: Links to this post