This is a late-series 1969 card, showing Jim Gosger in his new Seattle Pilots uniform. (It’s too bad Topps didn’t think ahead, and put all the expansion team players in the later series, so they had time to get good photos of all the players.)

Gosger was signed by the Red Sox in 1962, and made his big-league debut with the Sox in May 1963. He played in 19 games that season, mostly as a pinch-hitter or pinch-runner, although he made 2 starts in center field in the season’s final week.

Jim was back in the minors for all of 1964 and the first half of 1965. Beginning on July 9th, he made 19 consecutive starts in center field (replacing Lenny Green), then moved over to right field for the 18 of the next 20 games, while Tony Conigliaro was out of the lineup. When Tony C. returned to the lineup on 8/20, Gosger moved back to center field for the final 42 games. All told, he started 79 of the final 81 games after his recall. 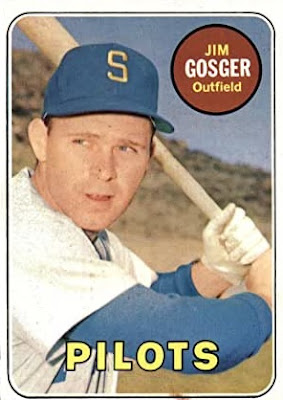 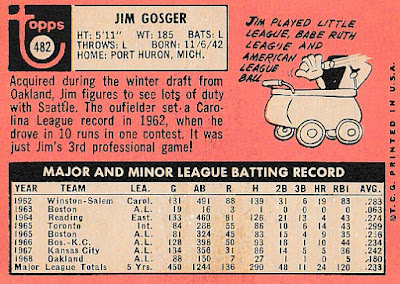 For the first two months of the 1966 season he alternated in center field with Green and George Thomas, then was traded to the Athletics (with pitchers Guido Grilli and Ken Sanders) for outfielder Jose Tartabull and pitchers John Wyatt and Rollie Sheldon. That year, left and center fields were a carousel for the Athletics (with only right fielder Mike Hershberger getting regular playing time). Jim split his time between left and center fields, sharing the starts with Joe Nossek, Roger Repoz, Larry Stahl, and Danny Cater.

Hopefully he made the most of that 1966 mish-mash, because Rick Monday joined the squad in 1967, taking over the center field job in game #10 and for several years thereafter. Gosger was the team's 3rd outfielder in terms of innings played, but he was backing up at all three spots (with Cater starting more in left field than Gosger).

His playing time decreased even more in 1968. Reggie Jackson was in his first full season, moving Hershberger over to share left field with rookie Joe Rudi, and sending Gosger to the bench.

Jim was selected by the Seattle Pilots in the October 1968 expansion draft, and was the team's starting center fielder for 10 of the first 14 games. He was soon replaced by Wayne Comer, and by mid-season was sent to the Mets in exchange for Greg Goossen. He spent the rest of the season in triple-A, only returning to the Mets for 10 games in September, and was not on the Mets' post-season roster.

After the 1969 season Gosger was traded to the Giants for pitcher Ray Sadecki and outfielder Dave Marshall, but before playing any games for San Fran, he was acquired by the Expos in late-April 1970.

For 1970 and 1971, Jim played parts of both seasons with the Expos while also spending a lot of time with their AAA team.

Although very much alive, last year the Mets mistakenly included him in a video honoring deceased ex-Mets.

Mike Lum first appeared on a "National League Rookies" card in the 1968 set.

Lum was the 3rd outfielder, behind Felipe Alou (CF) and Hank Aaron (RF). However, he played less than half as many innings as they did, and was so close to the next two (Tito Francona and Tommie Aaron) that they could all be considered third outfielders as they manned left field during Rico Carty's 1-year absence. 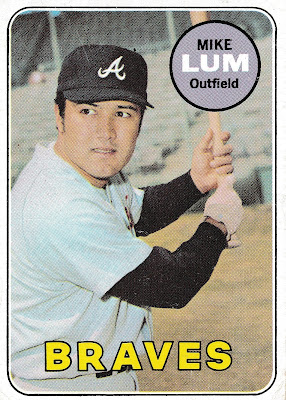 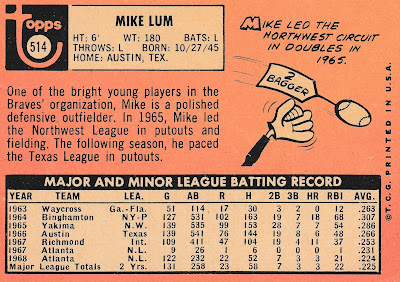 With Carty's return in 1969 plus the acquisitions of Tony Gonzalez and Bob Aspromonte, left field was quite crowded, leaving Lum with little to do but pinch-hit.  Of his 121 games, he only started 32, across all three positions.

Alou was traded away after 1969 but that just gave Gonzalez more playing time in 1970. In 1971 the Braves’ outfield was completely revised. Gone were Hank Aaron (moved to 1B), Gonzalez, and Carty. In were Lum (RF), Sonny Jackson (CF) , and Ralph Garr (LF).

Mike got 350 to 500 at-bats every season through 1975 while splitting his time between the outfield and first base.

After the 1975 season he was traded to the Reds for shortstop Darrel Chaney.  He spent the next 3 seasons as the Reds' 4th outfielder. (When the first three are named Foster, Geronimo, and Griffey, that means you are a pinch-hitter.)

Lum was granted free agency after 1978 and returned to the Braves as a backup 1st baseman and pinch-hitter. Released in May 1981, he pinch-hit for the Cubs for the rest of that season.

Mike played in Japan in 1982, then began a long coaching career. He was a hitting coach for the Braves, White Sox, Giants, and Royals from 1983-89. Since 1990 Lum has been a minor-league instructor for the White Sox, Brewers, and Pirates.
Posted by Jim from Downingtown at 7:16 AM No comments: