Before signing with the Reds in 1957 (I did not know he was with the Reds!), Mike Cuellar pitched for the Cuban Army team, and tossed a no-hitter in 1955. He played his first 5 pro seasons for Cincinnati’s AAA team. From 1957 to early 1960, this was on his home turf of Havana, Cuba. 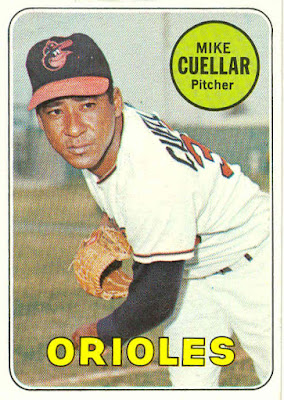 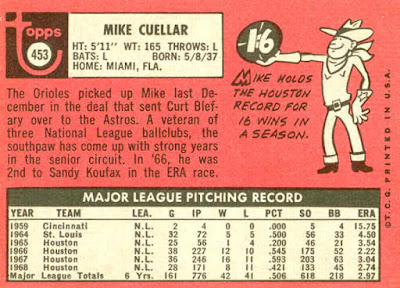 During the 1960 season, the Havana team relocated to Jersey City, then to Indianapolis in 1961. Mike also played 2 games for the Reds in April 1959.

Cuellar spent the 1962 season pitching for Monterrey in the Mexican League.

He returned stateside in 1963, now playing for the Jacksonville Suns, the Indians’ AAA team. In 1964 Jacksonville became a Cardinals’ affiliate, so Cuellar was now a Cardinal. He was promoted to St. Louis in mid-June, and appeared in 32 games, mostly working out of the Cards’ bullpen.

Cuellar was back in Jacksonville to start the 1965 season, but in mid-June was traded (with pitcher Ron Taylor) to the Astros for pitchers Hal Woodeshick and Chuck Taylor. Mike finished out the season in the Astros’ bullpen, as the rotation was stocked with Bob Bruce, Turk Farrell, Don Nottebart, Larry Dierker, Dave Giusti, and Robin Roberts.

In 1966, Cuellar joined the rotation in late-April, and cruised up the depth chart past all those pitchers, leading the staff with 227 innings pitched, and finished up with 12 wins. Mike was also the staff ace in ’67, winning 16 games and making his first of 4 all-star teams.

After an off year in 1968 (8-11, 170 innings), Cuellar was traded to the Orioles for outfielder Curt Blefary. He joined a starting rotation that also featured Dave McNally and Jim Palmer, and helped power the Orioles teams in the 1969-74 era. Cuellar won the Cy Young award in his 1st season with the O’s, and in 1970 his 24 wins tied him for the AL lead (with teammate McNally). He also led the AL with 21 complete games.

Mike hooked on with the Angels in January 1977, but appeared in only 2 games. He was released on May 16th, ending his 15-year career.

Posted by Jim from Downingtown at 1:36 PM 2 comments: Links to this post

My first recollection of Grzenda was in 1967, when I was at a Phillies/Mets game in Philadelphia. When I looked him up in Retrosheet.org today, I saw that it was on August 15th and was his first game of the season for the Mets. Joe pitched in both ends of a doubleheader that day. (I don’t remember any details of the game – only that I thought “Hey, this guy’s missing some vowels!”)

Grzenda was signed by the Tigers in 1955, and wallowed in their farm system as a starting pitcher for 9 years until he was released in July 1963. His only big-league time with the Bengals was 4 games in early 1961, for a total of 5 innings. 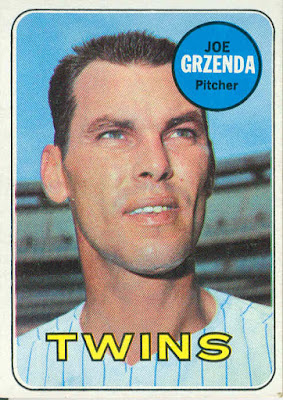 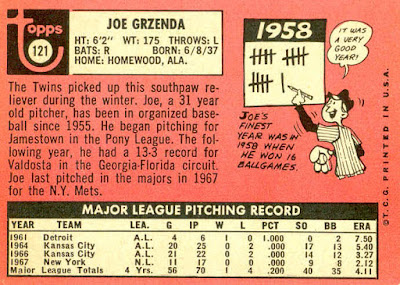 Joe got an invite to the Athletics for spring training 1964, and pitched in their organization for the next 3 ½ years. He played 20 games for Kansas City that summer, and another 21 in late 1966, but spent the balance of his time with their AA and AAA teams. By now he was strictly a reliever, both in the majors and minors.

The Mets purchased his contract on 8/14/67, and the next day he pitched in both ends of a doubleheader in Philly. After the season he was sold to the Twins, but spent the entire 1968 season in the minors.

1969 to 1972 were Joe’s only full seasons in the major leagues. They were also his only years with baseball cards. He pitched in 38 games for the Twins in ’69, as the left-handed short man out of the ‘pen.

He was traded to the Senators the following spring, and pitched in over 40 games in each of his 2 seasons there, the Nats’ final 2 years in Washington. Grzenda pitched the last inning of the last-ever Senators game, on 9/30/1971. After getting 2 outs the fans stormed the field to begin collecting souvenirs, causing the game to be forfeited.

After 1971, Joe didn’t make the move to Texas with the rest of his team – he was traded to the Cardinals for infielder Ted Kubiak, and played his final season with St. Louis.

Grzenda played in the minors in ’73 and ’74 before retiring.
Posted by Jim from Downingtown at 9:42 AM No comments: Links to this post