Here's journeyman Roberto Pena, airbrushed out of his Pirates uniform. Pena was selected from the Phillies in the expansion draft following the 1968 season.  This is his first Topps card since 1966, and his first card I had. (A few years ago, I got his 1970 card.)

He had unexpectedly spent the '68 season as the Phillies' regular shortstop. The Phillies had high hopes for their shortstop prospect Don Money that season, but after a handful of games, it was clear that he wasn't ready for the big time, so weak-hitting veteran Bobby Wine took over, Money was sent down, and Pena was recalled from their triple-A team (in San Diego, no less). A few weeks later, Wine injured his back and was lost for the season, thrusting Pena (who had spent all of 1967 in the minors) into the starting role. 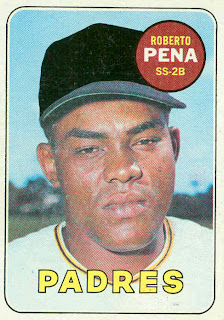 (No respect! After 138 games as the Phillies' starting shortstop, and now on a team starting from scratch, Topps still saddles him with a utility position) 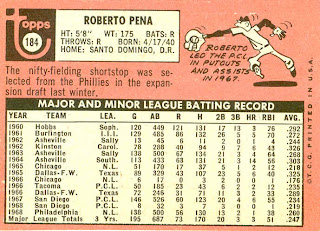 Pena was signed by the Pirates in 1960. After 5 seasons as a minor-league shortstop, he was traded to the Cubs for infielder Andre Rodgers in December 1964. Roberto made his major-league debut in April 1965, and played 51 games with the Cubs as Don Kessinger's backup at shortstop. He also played 80+ games in the minors that season, as well as the bulk of the '66 season.

The Phillies drafted him in November 1966, and he spent the '67 season stashed at the Phillies' halfway house for ex-big leaguers (a/k/a the AAA San Diego Padres), where he was the PCL all-star shortstop.

As mentioned above, after a season as the Phillies' #1 shortstop,  he (along with the Phillies' other two shortstops Bobby Wine and Gary Sutherland) was lost in the expansion draft. Pena split the shortstop job with Tommy Dean in the Padres' inaugural season, then it was on to the Athletics in a March 1970 trade for 1st baseman Ramon Webster.

Two months later he was shipped out to the Brewers for 2nd baseman John Donaldson. Pena shared the shortstop job with Ted Kubiak (wow, lots of ex-Athletics orbiting around Roberto Pena!) in 1970, and moved over to 1st base in 1971 (with some playing time at SS and 3B). His last game was in September 1971.

Posted by Jim from Downingtown at 11:06 PM No comments:

This is the final card for infielder Chuck Cottier (#252), who looks more like an early-1960s' test pilot or astronaut than a baseball player. Chuck was last seen in the 1964 Topps set; perhaps thanks to expansion, he's back for one more year.

Cottier was signed by the Orioles in 1954, and played 5 seasons as a 2nd baseman in the minors before making his big-league debut with the Milwaukee Braves in April 1959. He played most of the season at triple-A Louisville, and split the 1960 season between Louisville and Milwaukee. With the Braves in '60, he shared the 2nd base job with veteran Red Schoendienst.

After the 1960 season, he was traded to the Tigers, but after playing in only 10 games for Detroit in 1961, he was flipped to the Senators in June for pitcher Hal Woodeshick. 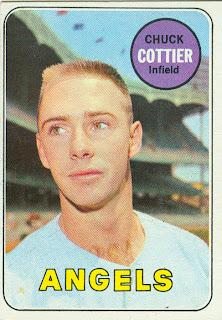 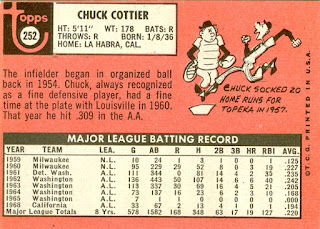 Chuck was Washington's regular 2nd baseman from June 9, 1961 to June 25, 1963, losing his starting job when the Sens acquired veteran Don Blasingame from the Reds. Cottier hung on with the Senators in 1964 as the backup 2nd baseman, then spent the 1965 to 1967 seasons in the minors, switching to the Angels' organization at the start of the '67 season.

In 1968 he spent most of the season in triple-A, then was recalled by the Angels in early August, playing 33 games for the remainder of the season. 1969 was the end of the line for Cottier. He had 2 at-bats that season (4/30 and 5/9) before calling it a career.

Chuck later managed the Seattle Mariners from late 1984 through early 1986.
Posted by Jim from Downingtown at 12:01 AM 3 comments:

This is Dick Allen's final card from his first stint with the Phillies. After winning the NL Rookie of the Year award in 1964, and finishing among the league leaders in homers and RBI several times, Allen wore out his welcome in Philly and was traded after the 1969 season in a 7-player deal that also included Curt Flood and Tim McCarver. After a season each with the Cardinals and Dodgers, Allen had several great seasons with the White Sox before returning to Philadelphia for '75 and '76. 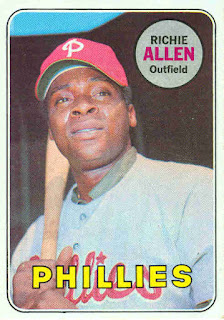 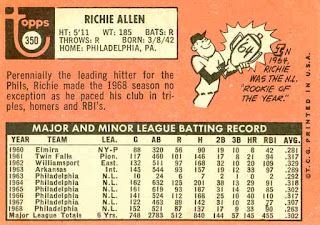 Allen was a high school baseball and basketball star in western Pennsylvania, and was signed by the Phillies in 1960. (The team also signed his brother Hank the same year. Hank would go on to play outfield for the Washington Senators, among others.)

Dick began his minor-league career as a 2nd baseman, and switched to outfield in 1962. After a 2nd full season as an outfielder, he made his major-league debut on September 3rd for the Phillies. Allen played 10 games for the Phillies that season.

Allen moved to 3rd base at the start of 1964, having never played there professionally (except for 1 inning the previous September). He started every game at 3rd in his rookie season, and won the NL Rookie of the Year award. He also led the league in runs, triples, and strikeouts, while hitting 29 homers and collecting 91 RBI. Dick also started 160 games at 3rd base in 1965. Although his home run output dropped to 20, he made his first of 3 consecutive all-star appearances.

1966 started to break up the routine. Allen started 91 games at 3rd base, but (never a great defensive player) also played 47 games in left field. He played 20 fewer games than in 1965, but doubled his home run output with 40 dingers. Dick also led the NL with a .632 slugging percentage. In 1967 he was back exclusively at 3rd, that is, until he sliced up his wrist and missed the last 6 weeks of the season.

Allen returned to full-time status in '68, but this time as the Phillies' left fielder. Only 10 of his 150 games were at his former position. Although he hit 30 homers, his batting average fell to .263, after batting over .300 in his first 4 seasons. He wouldn't finish above .300 until moving to Chicago in 1972.

Because of his defensive liabilities, he moved to 1st base for the 1969 season. That year he also missed a month in mid-season while suspended by the team. Over the years, Allen's relationship with Phillies' management (and fans) deteriorated, and it contributed to the firing of the manager in both 1968 and 1969, and culminated in his trade to the Cardinals after the 1969 season. The Cardinals acquired Allen, 2nd baseman Cookie Rojas, and pitcher Jerry Johnson for relief pitcher Joe Hoerner, catcher Tim McCarver, and outfielders Curt Flood and Byron Browne. Famously, Flood refused to report to the Phillies.

After a stopover in Los Angeles, Allen was traded to the White Sox, where he won the AL MVP award in 1972, while also leading the league in home runs and RBI, and finishing 3rd with a .308 batting average. He also made the all-star team in all three of his seasons with the Sox.

Allen returned to the Phillies midway through the 1975 season, after holding out for several months. In 1976 his bat helped propel them to their first post-season appearance since 1950. Another disagreement with management sent him on his way after the season, this time to Oakland, where he started 50 of the first 61 games at 1st base before the team released him in mid-June.


6/16/2012 EDIT: Here's an excerpt from Allen's Wikipedia page that I just found.  It's a quote from the Philadelphia Inquirer, reviewing a concert that Allen and his musical group had during halftime at a 76ers game in the mid-1960s:

Joe Kuharich - LOL!
Posted by Jim from Downingtown at 10:17 PM No comments: