Hector Torres was named as the shortstop on Topps’ 1968 All-Rookie team. The Astros were so high on him, that they traded the 1966 Topps All-Rookie shortstop (Sonny Jackson) to the Braves after the 1967 season to make room for Torres.

Hector was signed by the Giants in 1962, and after 4 seasons playing for the Giants’ class D, A, and AA teams, he was traded to the Angels in April 1966 for outfield prospect Dave Marshall (who we will see on this blog in 3 weeks).

Torres played the next 2 seasons for the Angels’ AAA team in Seattle, then was traded to the Astros for Jim Weaver in November 1967.

With incumbent shortstop Jackson departed for Atlanta, Torres won the starting shortstop job as a rookie, and except for the first half of May and a week in June, Hector started almost every game through the end of August. 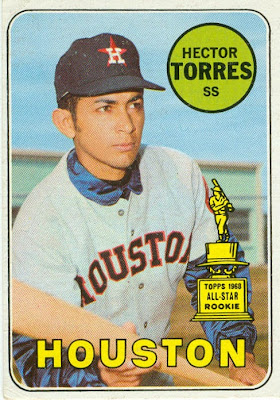 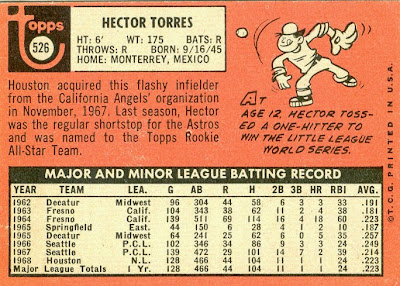 This gave the ‘Stros a new-look infield, with Rusty Staub moving in from his outfield post to play 1st base, Denis Menke (acquired from Atlanta for Jackson) playing 2nd base since Joe Morgan missed all but the first week with injuries, and rookie Dave Rader sharing the hot corner with long-time 3rd-sacker Bob Aspromonte.

With the return of Morgan in 1969, long-time Braves’ shortstop Menke moved across the diamond to shortstop, relegating Torres to the bench and to triple-A for the next 2 seasons.

After the 1970 season, Hector was traded to the Cubs for shortstop prospect Roger Metzger. Although Torres managed to stay in the majors for the entire season, he was stuck behind Don Kessinger, and only started 11 games at shortstop.

Just prior to the 1975 opener, he was sold to the Padres. Torres started about 1/3 of the games at shortstop for the Padres in ‘75, and had career highs in batting average (.259) and RBI (26). He backed up Enzo Hernandez again in 1976, receiving slightly less playing time than the previous season.

Hector was traded to the Indians in December 1976, who flipped him to the Blue Jays during spring training in 1977. Torres started 55 games at shortstop for the expansion Blue Jays, more than rookie Bob Bailor or the other 3 players used there.

That was Hector’s final season in the majors. He played for the Jays’ and Pirates’ AAA teams in 1978 before retiring.

Posted by Jim from Downingtown at 7:39 PM 3 comments:

1969 Topps Set is in the Quarter-finals!

So, Robert over at the $30 a Week Habit blog has been running a 16-set tournament, where bloggers vote for which set he should complete next. The 1969 set is now in the quarterfinals, facing off against the 1974 set. I vote for the 1969 set (surprise!), because:


The first cards for the 4 new expansion teams. Players are airbrushed in the early series, but shown in their new uniforms in the later series (Oakland A’s too!) 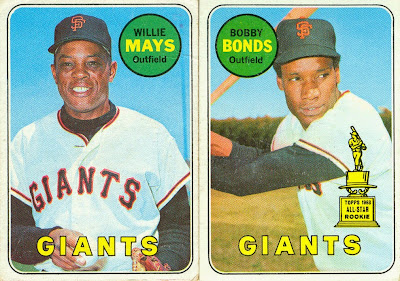 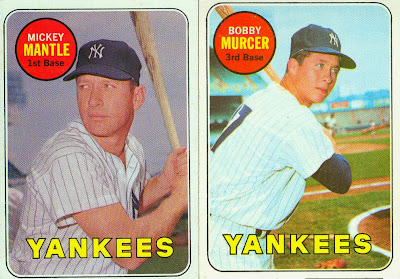 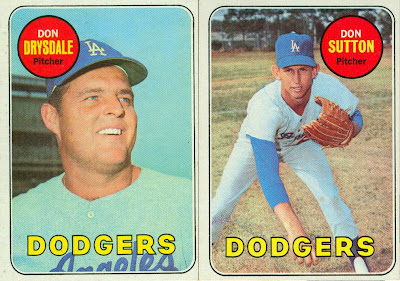 The first Topps cards of Ted Williams since 1958: 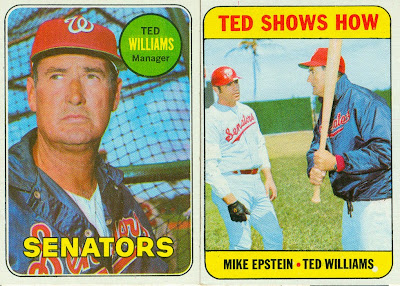 45 future Hall-of-Famers are in the set, including Willie Mays, Mickey Mantle, Don Drysdale, Roberto Clemente, Ernie Banks, and Bill Mazeroski, none of who are in the 1974 set.

Key players for the Miracle Mets in the 1969 World Series:

Ken Boswell was one of two 2nd basemen named to the Topps All-Rookie Team in 1968. He was the Mets’ regular 2nd baseman from 1969-1972, and played his final 3 seasons with the Astros.

Boswell was signed by the Mets in 1965, and played 3 seasons in the minors before making his major-league debut in September 1967.

He began the 1968 season as the team’s starting 2nd baseman, but shared the position with veteran utilityman Phil Linz, each making 67 starts. It appears that may Ken may have been on the DL from late June until late August, because he played in no major- or minor-league games during that time. 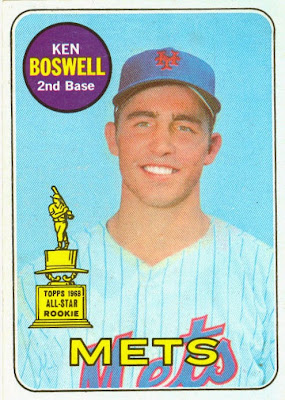 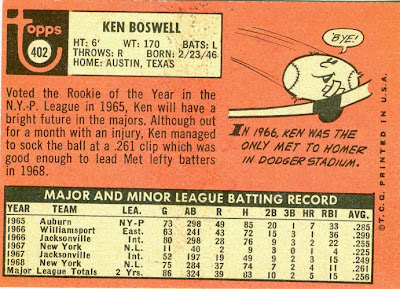 With Linz retiring after the 1968 season, Boswell took over as the primary 2nd baseman, starting about 90 games per season there from 1969-72. (3B/2B Wayne Garrett picked up most of the remaining games.) Ken hit .333 in the 1969 ALCS vs. the Braves and also in the World Series vs. the Orioles.

After the 1972 season, the Mets acquired 2nd baseman Felix Millan from the Braves, relegating Boswell to a bench role. Ken only started 14 games in '73 and 46 in '74.