Ok, after much delay, I have finally added text to this blog post.


Steve Carlton, who is the greatest Phillies’ left-handed pitcher in their history, began his career with the Cardinals in the mid-1960s.

During his rookie season, he pitched in 11 games prior to the end of June, and then not again until late August, when he pitched 4 times over the season’s last 5 weeks. (I assume he was on the DL in July and August, because he has no minor-league record for 1965.) 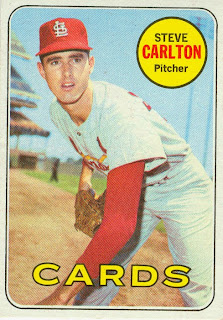 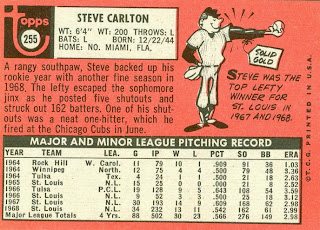 Carlton was back in the minors to start the 1966 season, and after compiling a 9-5 record in 19 starts, he rejoined the Cardinals in late July, and pitched 9 games in the final 2 months of the season.

Steve began the 1967 season as the team’s 5th starter, and finished the season with a 14-9 record and an appearance in the World Series.

After the season, he was traded to the Phillies for pitcher Rick Wise. Both pitchers were involved in contract squabbles with their respective teams. (Imagine trading away a 20-game winner!) 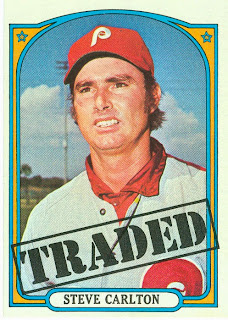 Here is Carlton's first card as a Phillie.

Posted by Jim from Downingtown at 6:17 PM

Jim, there a book about Carlton's 1972 season, have you read it? The discrepancy between his performance and the rest of the team is amazing. If he had been hurt all season, what do you think would have been the Phillies record had been? Worse than the 62 Mets? All in all an amazing season.

Re: Steve Carlton in 1965. There was some kind of rule back then where they had to keep players on the big league roster after their first year (maybe a modification of the old "bonus baby" rule?), so he was with the Cardinals for the entire year even though he didn't pitch much. They kept Nelson Briles on the roster for the same reason, but they did manage to use him more. 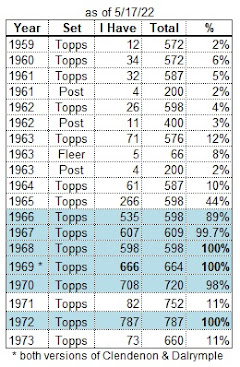