Green was signed by the Kansas City Athletics before the 1960 season, and played 4 years in their farm system. In 1960 he played shortstop for the Sanford (FL) Greyhounds in the class-D Florida State League. For the next 2 seasons he was primarily a third baseman.

In 1963 he switched to 2nd base while playing a full season in AAA ball, followed by a September call-up to Kansas City. He played a few games for the A’s at SS and 2B in the closing weeks of 1963. 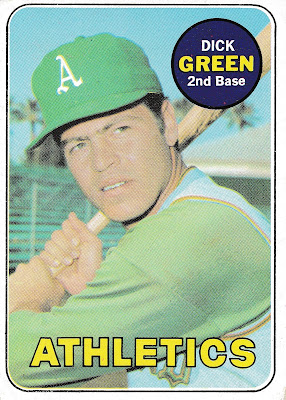 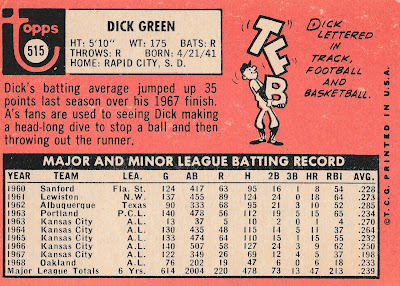 With the off-season trade of incumbent 2nd baseman Jerry Lumpe to Detroit, Green became the starting 2nd baseman from Opening Day 1964, and would hold that job through the end of the 1974 season, except for a time during 1967-68.

Dick began the 1967 season as the starter, but by mid-June rookie John Donaldson had taken over the starting job. Green rode the bench for a while, but then started most games at 3rd base in July and August. Once rosters were expanded in September, he lost that job to rookie call-up Sal Bando.

With Donaldson still entrenched at 2B in 1968, Green was used mostly as a pinch-hitter for the first half of the season (while also missing the entire month of June), but then regained his old 2nd base job in early August.

After playing in only 76 games in 1968, it was smooth sailing for Green for the next 3 years, playing more than 130 games in each season while nailing down the 2nd base job.

1972 was the low point of Dick’s career. He started the first 7 games of the season, then was out with injuries until mid-August. The Athletics filled in with Larry Brown, Tim Cullen, Dal Maxvill, and Ted Kubiak during that time. Green only started 15 of the 50 remaining games after his return, with Maxvill making most of the starts by then.

Rookie Phil Garner would be taking over the 2nd base job in 1975, so Green was released in early-March, ending his 12-year career.

I remember for a few games in the early 70’s, when the Athletics were the visiting team, their starting lineup would consist of the 8 other players, and another good hitter in the lineup, nominally as the "2nd baseman". This batter (a DH-type, I think maybe Gonzalo Marquez) would bat in the top of the 1st inning, then when the A’s took the field in the bottom of the first, Green would enter the lineup as the 2nd baseman. The whole scheme was to get the light-hitting Green one less at-bat per game.

Posted by Jim from Downingtown at 2:16 PM