Boyer was signed by the Kansas City Athletics in 1955 as a bonus baby, and began his pro career on the Athletics’ major-league roster. He played sparingly in 1955, only making 6 starts at 3rd base (behind future Yankees’ teammate Hector Lopez), while also getting a few starts at 2nd base and left field. In 1956 Boyer started 34 games as the A’s backup 2nd baseman.

In June 1957, after appearing in only 10 games (9 as a pinch-runner) and having no at-bats, Boyer was sent to the Yankees to complete an 11-player trade which included pitchers Art Ditmar and Bobby Shantz going to the Yankees.

Clete spent the remainder of 1957, all of 1958, and June and July of 1959 in the minors, getting the much-needed experience he missed as a bonus baby. 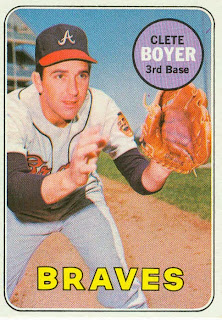 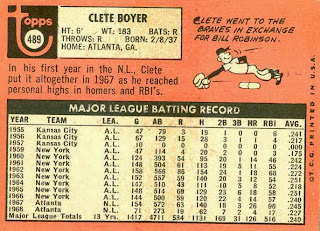 Boyer began the 1959 season with the Yankees, but was sent to the minors for 2 months. When he returned, he was the starting shortstop from mid-August to mid-September. (Regular shortstop Tony Kubek missed 30 games that season, and also played half his games in the outfield.)

Clete rode the bench for the first half of 1960, then won the 3rd base job from long-time Yankees’ infielder Gil McDougald (who was in his final season), and started 92 of the final 118 games at the hot corner.

1966 was a strange season. During the first half, left fielder Tom Tresh (who had played the first 4 ½ months of the 1962 season at shortstop in Kubek’s absence) was moved to 3rd base, with Boyer becoming the regular shortstop. This arrangement continued until late-June, when Tresh returned to left field, Boyer to 3rd base, and Horace Clarke installed as the regular shortstop.

Clete hit a career-high 26 home runs in 1967, and played 4 ½ seasons for the Braves (although missing the last 2 ½ months of the 1968 season). He was released by the Braves at the end of May 1971, after clashing with the Braves’ manager and general manager.

After playing the remainder of the ’71 season for the Padres’ AAA team in Hawaii (nice work, if you can get it!), Clete played in Japan from 1972-75.

Clete’s brother Ken was a 3rd baseman from 1955-1969 (mostly with the Cardinals). They both played 3rd base in the 1964 World Series. His other brother Cloyd was a pitcher with the Cardinals from 1949-52, and was Clete’s teammate with the 1955 Athletics.