Pat Dobson is most-remembered as the 4th man in the Orioles’ four 20-game-winners pitching rotation in 1971, but only 2 of his 11 seasons were spent with the Orioles. 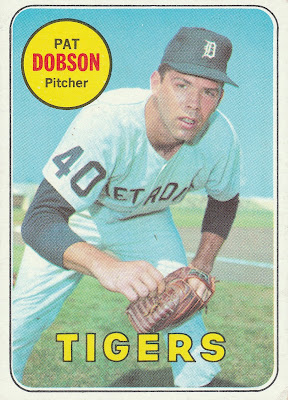 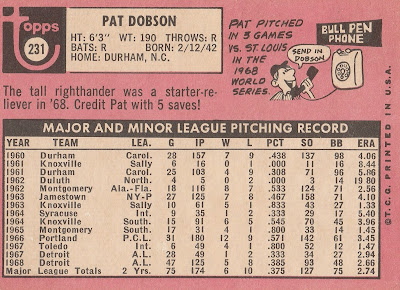 After the 1969 season, Pat was traded to the Padres (with 2B Dave Campbell) for pitcher Joe Niekro.  Dobson only played one season for the Padres, but he compiled a 14-15 record in 40 games (34 starts) and struck out 185. That was good enough to get the attention of Orioles’ management, who rescued him from the Padres.

Dobson was traded to the O’s (with pitcher Tom Dukes) for pitchers Tom Phoebus and Al Severinsen, and shortstop Enzo Hernandez in December 1970. Pat posted a 20-8 record, 2.90 ERA, and 187 strikeouts (all career bests) in 1971.

The following season he made the All-Star team, despite finishing with a league-leading 18 losses.

In November ’72 he was traded to the Braves (along with 2nd baseman Dave Johnson, catcher Johnny Oates, and pitcher Roric Harrison) for catcher Earl Williams. Dobson was only a Brave until early-June, when he was shipped off to the Yankees in a deal where 4 other scrubs changed teams.

Pat played for 2 ½ seasons in the Bronx. In 1974, he and Doc Medich both notched identical 19-15 records, with similar strikeout numbers.

In 1975 he slipped to 11-14, and was traded to the Indians after the season for outfielder Oscar Gamble.

In 1979, Dobson managed the Maricaibo team in the Inter-American League. He pitched 1 inning of 1 game that season - a bad idea. His ERA was 63.00!

After his playing career, Pat was a pitching coach for the Brewers, Padres, Royals, and Orioles.   In the late-1990s he joined the Giants as a scout.

Posted by Jim from Downingtown at 7:14 PM No comments: Links to this post

Top 20 players not yet blogged