1966 was the only season that he spent entirely with the Cubs, and saw action in 75 games. That was also the first year he spent some time behind the plate, both with the Cubs and in the Arizona Fall Instructional League.

He was briefly claimed by the Yankees in the 67/68 off-season, but was returned to the Cubs the following April. 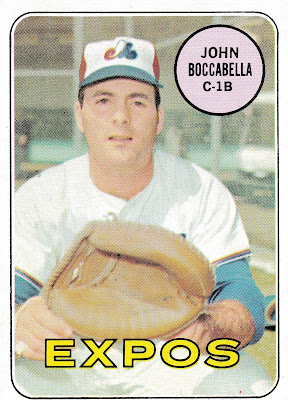 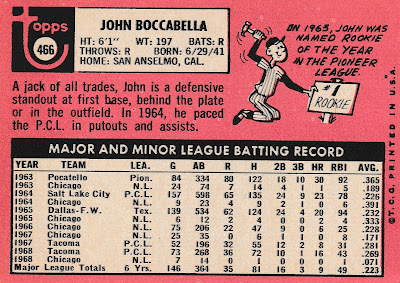 Check out John’s 1968 stats. He played 73 games for the Cubs’ AAA team while only playing 7 games (with 14 at-bats) for the Cubs. Cup of coffee, right? No! He was the Cubs’ #2 catcher that season! How is that possible? Well, Randy Hundley started 156 games that year, collecting 606 plate appearances. Boccabella started 4 games and played 28 innings, while 4 other backstops (Randy Bobb, Gene Oliver, John Felske, and Bill Plummer) split the remaining 40 innings. With all that leisure time in 1968, it’s amazing he even has a card in the 1969 set.

John was selected by the Expos in the October 1968 expansion draft, but so were veteran Astros’ catchers John Bateman and Ron Brand, so Boccabella didn’t really get a fresh start in his new location. Still, John managed to stay out of the minor leagues now that he was with the Expos. He was also a favorite of the PA announcer, who got to say “John Boc-a-BELLLLLLLLLLL-a” many times.

Boccabella was the team’s starting catcher for the first 2 months of 1972, then rookie Terry Humphrey took over for 2 months. Tim McCarver (acquired in mid-season from the Phillies for Bateman) handled most of the catching over the final 2 months.

Surprisingly (to me anyway), John was the team’s #1 catcher during the 1973 season, starting 106 games. Humphrey got the odd start during the first half, until he was sent down in mid-season. John was out of the lineup for most of September, but finished up with 10 consecutive starts to close the season.

The Expos’ first-round draft choice Barry Foote was going to be the “catcher of the future”, so Boccabella was dealt to the Giants in April 1974, where he finished his career as a seldom-used backup.

Posted by Jim from Downingtown at 7:43 AM No comments:

This makes 2 consecutive Royals, which I usually try to stay away from. But I’m wrapping up the remaining "final cards" in the 1969 set and over the next 20 cards to be posted, 6 are Royals, so buckle-up.

I always thought that the early Royals' uniforms looked a lot like the Dodgers' uniforms, with a similar shade of blue and the script lettering on the front. In this case, Alcaraz IS wearing a Dodgers' uniform. 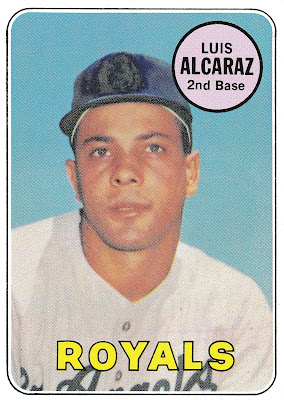 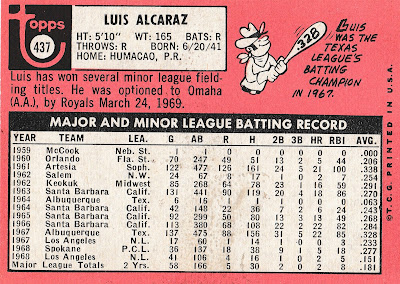 Luis Alcaraz (#437) was signed by the Milwaukee Braves in 1959, and a year later was traded to the Dodgers' organization. Luis spent 10 years in the minors, never advancing above class A during his first 8 seasons. In 1967 and 1968 he played in AA and AAA ball respectively, while also playing a few games with the Dodgers in those 2 seasons.

He made his major-league debut on September 13, 1967, starting 17 of the final 18 games at 2nd base. That late-season tryout earned him a roster spot to start the 1968 season, but although he started 27 of the first 37 games at either 2B or 3B, by June he rarely played, and was back in the minors until September.

Purchased by the Royals a week after the expansion draft, he appeared briefly with KC over the next 2 seasons, but spent most of his time with their AAA team in Omaha.

He never played in the majors again after 1970, but during Spring Training 1971 he was traded to the White Sox for veteran 2nd baseman Bobby Knoop.

He subsequently played in the Braves' and Pirates' organizations in 1972, and played in Mexico from 1973-1981, finally retiring at age 40.
Posted by Jim from Downingtown at 2:03 AM 1 comment: