I first knew of Mack Jones as the Braves’ center fielder in 1967. That would be his last season with the Braves however. He was traded to the Reds prior to 1968, and moved on to the Expos in 1969. His card is in the 7th series, so he is photographed in the new Montreal duds.

He made his major-league debut in July 1961, starting 19 straight games in center field. He stuck around with Milwaukee until mid-August, when he was returned to the minors. 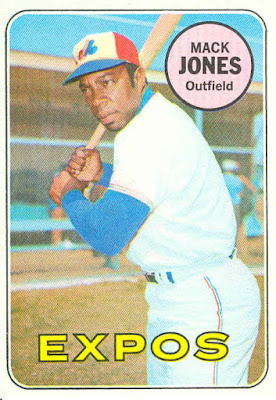 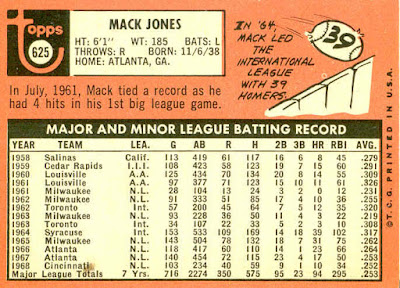 In 1962 he was the Braves’ starting right fielder for 84 of the first 86 games (moving Hank Aaron over to center field). After another week as the starting center fielder, he was returned to the minors for the remainder of the season.

Mack was the opening-day left fielder in 1963, then spent several weeks on the bench until becoming the starting center fielder for much of May and June. He rode the bench for all of July, then it was back to the minors at the start of August.

Inexplicably, Jones played all of 1964 with the Tigers’ AAA team in Syracuse, NY. While there, he batted .317 with 15 doubles, 18 triples, 39 home runs and 102 RBI. He also set a still-standing Syracuse record with 111 runs scored. His outfield mates that season were future Tigers’ stars Willie Horton and Jim Northrup.

After the 1967 season, Jones was traded to the Reds (along with pitcher Jay Ritchie and outfielder Jim Beauchamp) for slugging IF-OF Deron Johnson. The Reds had also acquired outfielder Alex Johnson from the Cardinals in the same off-season, and with Alex having his first of 3 consecutive .300+ seasons, plus Pete Rose and Vada Pinson all manning the outfield, Jones never found a spot in his lone season with Cincinnati. He only started 40+ games in the outfield (mostly in early-July and mid-August) and was used mainly as a pinch-hitter that season.

As a veteran spare part, Jones was left unprotected in the expansion draft following the 1968 season, and was the Expos’ 2nd draft pick (behind outfielder Manny Mota). He was Montreal’s starting left-fielder in 120 games – pretty good considering the revolving door most expansion teams are in their first season. He also hit a career-high .270 in 1969.

Jones played for the Expos for another 1 ½ seasons. He was the starting left fielder for 70 games in 1970 (mostly in the first half), and for 24 of the first 65 games in 1971. He played his final game on July 1st and was released a week later.

Posted by Jim from Downingtown at 9:41 PM