In 1974 his record with the Rangers was 25-14, and he finished 2nd in the Cy Young voting to the Yankees’ Catfish Hunter, who had the same record. They co-led the AL in wins that season, while Jenkins led the league with 29 complete games, 6 more than Hunter. 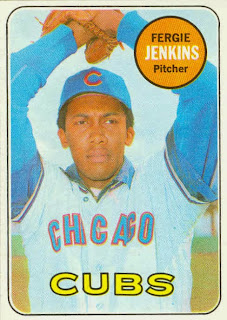 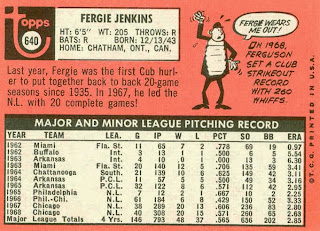 All this was a far cry from his beginnings with the Phillies. He was signed in 1962 and made his debut in September 1965, pitching 12 innings in relief over 7 games. After making the Phillies out of spring training in 1966, he didn’t pitch until the 7th game of the season. (Apparently, the geniuses running the Phillies couldn’t fit him into a rotation that included the likes of Ray Herbert and Ray Culp!)

Jenkins’ only game with the Phillies in 1966 was on April 20th, where he pitched the 4th and 5th inning of an 8-1 blowout at the hands of the Braves. He faced 12 batters (striking out 2), but evidently did not impress the Phillies’ brass. The next day he was traded to the Cubs for a pair of veteran pitchers on the downside of their careers. Fergie pitched out of the bullpen for the Cubs until joining the starting rotation on August 25th. After that, the party started!

Jenkins won 18 games in 1978 and finished 6th in the Cy Young voting. What a bargain! He remained in the starting rotation for 3 more seasons, although in his last season in Texas (1981) he compiled a 5-8 record (at age 38). Jenkins returned to the Cubs’ starting rotation for his final two seasons, winning 14 and 6 games.

He was released during spring training in 1984, ending his 19-year career. Jenkins was inducted into the Hall of Fame in 1991.

Posted by Jim from Downingtown at 3:13 PM