As usual, playing catch-up on the weekend...


This is the last card for Cookie Rojas as a Phillie. After the season, he would be traded to the Cardinals (with Dick Allen and pitcher Jerry Johnson) for Curt Flood, Tim McCarver, ace reliever Joe Hoerner, and backup outfielder Byron Browne.

After rotting on the St. Louis bench for 2 months, Cookie was traded to the Royals in mid-June, and had a 2nd career as the regular 2nd baseman for the upstart Royals, until the position was transitioned to Frank White during the 1975 season. 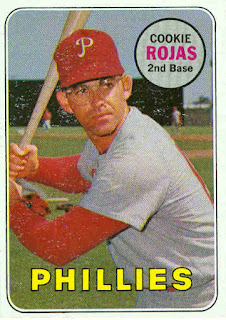 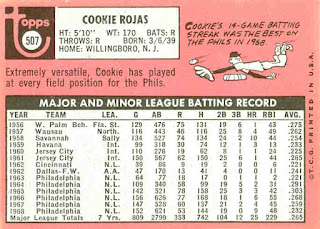 Rojas was born in Havana Cuba in 1939, and signed with the Cincinnati Reds in 1956. He played 7 seasons in the Reds' minor-league system, including two (1959-60) with his hometown Havana Sugar Canes. Some of his teammates on the Havana squad included future major-leaguers Mike Cuellar, Vic Davalillo, Chico Cardenas, Joe Azcue, Orlando Pena, and future Phillies' teammate Tony Gonzalez. During the 1960 season, the team was relocated out of Cuba to Jersey City, NJ.

Rojas began the 1962 season with the Reds, alternating at 2nd base with veteran Don Blasingame until late May, when Rojas was relegated to the bench. Cookie was sent down to triple-A in mid-July, and returned in September. After the season he was traded to the Phillies for pitcher Jim Owens.

Cookie was in the majors to stay in 1963. He played in 64 games primarily as a pinch-hitter and backup 2nd baseman. From 1964-66, Rojas primarily played outfield and 2nd base (with his games at 2B increasing as time went on), but he played other positions as well. He filled in as the team's emergency catcher, and also pitched in a game in 1967, completing his 9-position resume.

By 1967, he was almost exclusively the Phillies' regular 2nd baseman, having won the job away from long-time regular Tony Taylor. Rojas continued as a fixture at 2B through the 1969 season, although missing several stretches of playing time in 1969.

After the 1969 season, the Phillies continued with their roster turnover, parting ways with Rojas, Allen, Johnny Callison, and Turk Farrell. Rojas soon found himself in Kansas City, stabilizing the infield for the 2nd-year Royals, and made the all-star team 4 times while in KC.

Cookie remained the starting 2nd baseball for Kansas City until Frank White joined the team and shared the 2B job in 1975. He played 2 more seasons with the Royals as a backup infielder, retiring after the 1977 season.

After his playing career, Rojas coached for several teams, and managed the Angels in 1988. He is currently the Marlins' Spanish-language broadcaster. His son Victor was an anchor on the MLB Network for several seasons.

Posted by Jim from Downingtown at 6:40 PM

Rojas signed on with the Cubs as a player but never got into a game, then of course moved into the Cubs coaching staff.